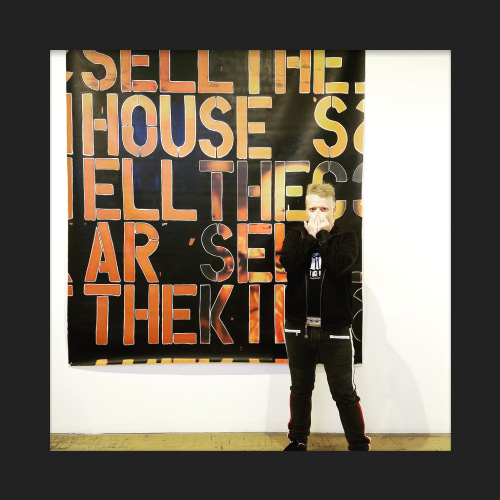 Matt Kennedy is the owner and director of Gallery 30 South, in Pasadena, California. He will be the guest in episodes 99 and 101 of The Path to Authenticity. Prior to opening his own gallery, he was the executive curator of La Luz de Jesus Gallery for almost a decade. He was also the creative director of La Luz de Jesus Press, where he oversaw the publication of about a dozen monographs and two massive survey books.

A Priest, a Pianist, and a Pirate – this helps explain that book title.

Curator. In my various capacities from brand management, to gallery directing, or running my collective – it’s all some form of curation.

”We’re only immortal for a limited time.”

Pranks or essays. Nothing beats a great prank. Satire is sanity in a crazy world.

Baraka, directed by Ron Fricke, Bravado by Rush, and Petra, the ancient city in Jordan

Greta Thunberg & Donald Rumsfeld. I admire the strength of commitment that young people have and which I feel is best exemplified by Swedish environmentalist Greta Thunberg. But, I also have a fascination with Donald Rumsfeld, who is one of the most frustrating figures in the history of American politics. In a counterfactual reality, he could have been Reagan’s Vice-President, and therefore President instead of George H.W. Bush. Instead, he became the symbol of America’s foreign policy failures from 2001 to 2008. Seen as full of contradictions by many, he is somehow completely consistent to his own sense of righteousness.

Sandra Dee. Gidget was a staple of syndicated television in the early seventies, and she was magical to six-year-old me.

Jack Parsons or Edgar Cayce. It would be incredible to meet both at the same time in May of 1944.

The ability to instantly speak, understand, read, and write new (and old) languages

I think, by providing an outlet to show a lot of artists, I may have saved a few lives.

Tensor Torsion, as applied to hyperdimensional physics, or how to be happy with less

I wish people knew less, in a way. If I could remain anonymous and do what I do, I would have a truer sense of what people think of my work.

I will feel like I’ve succeeded when I don’t have to work, but can still travel where and when I like, and eat what I want, without having to think about the financial feasibility.

“I wonder what Matt would think about this”

Gallery 30 South is mentioned in episode 94 of The Path to Authenticity, featuring the artist Elena Øhlander.

Matt is also the founder and creative director of the Panik Collective, a multi-cultural crew of anonymous artists who use pop culture iconography to make political and sociological statements.He curated the first modern survey of contemporary comic book art, called Pop Sequentialism. He rebranded the Pop Sequentialism website, which includes blogs about pop culture and links related to the topics addressed there. The new Pop Sequentialism is the nexus of all things pop culture, from fine art to film, fashion and collectibles.