XOXO: My Favorite Record from 2020 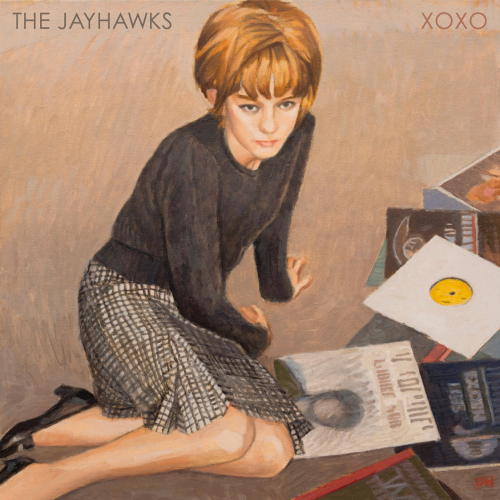 Twitter disgusts me. I try to stay away from it. But, I do have a profile for the podcast, where I promote the episodes and, occassionally, call out a particular U.S. Senator on his thinly-veiled feigned sincerity. But, I also use it to keep up with guests of the show.

Back in July, music journalist and guest of episode 26, Craig Havighurst, tweeted a link that caught my eye.

It was to a song from the then recently-released Jayhawks record, XOXO. The album cover drew me in, a painting of a young woman, bobbed auburn hair, sitting on the floor, skirted knees bent to her side with records scattered in front of her. Cindy Sherman came to mind.

Havighurst wrote the words “Wow. Okay.” to accompany the link to Homecoming, which might very well be the theme song for America in 2020.

“Yeah, the room is closing in,” it begins. “The air is getting thicker. It’s hard for me to breathe.” An then, “All the writing’s on the wall, but we refuse to read it, heads buried in the sand.”

The lyrics are fitting. But, you have to listen to understand the tweet – to hear the reason for the “wow.”

Before, I appreciated the Jayhawks from afar, but I had never bothered to listen closely. I listened very closely to this record, over and again.

Some of my favorite musicians released great music in 2020.

Among them, Jason Isbell and Jeff Tweedy. The year also brought a couple reissues for me to get excited about. Not least among them was a five-record set of “demos, outtakes, an in-store live set, at Tower Records, and a remastered version of the original release of Summerteeth. It’s the record that, nearly 20 years ago, lured me to Wilco the way XOXO lured me to the Jayhawks in 2020. And, as I sit here, I await the 10th anniversary edition of my Black Keys favorite, Brothers. But, start to finish, this is my favorite record of the year, and one I will listen to for many more.

It’s songs offer images or small-town escapes, a stripper’s woe, the young homosexual in the socialite’s orbit, little victories, the nagging impulse to call the girl who ripped out your heart and stomped on it, and many more. Living in a Bubble is the tune that stands out most to me. It tackles the subject matter of Homecoming in a slightly more upbeat tone.

The songs, their sequencing, and the lyrical stories they tell to great music stand out every bit as much as the Duncan Hannah painting on the cover. That pre-flower power girl in her waning teens who Hannah depicted in his piece, “The British Invasion,” stares out from that living room floor, perhaps into the future. To her, the idea of the year 2020 bring to mind Buck Rogers or Flash Gordon. She could have no idea what a shitty year it was to be. Or, that this record, of which she is emblematic, would make it better.

Pull your headphones over your ears. Close your eyes. Listen.