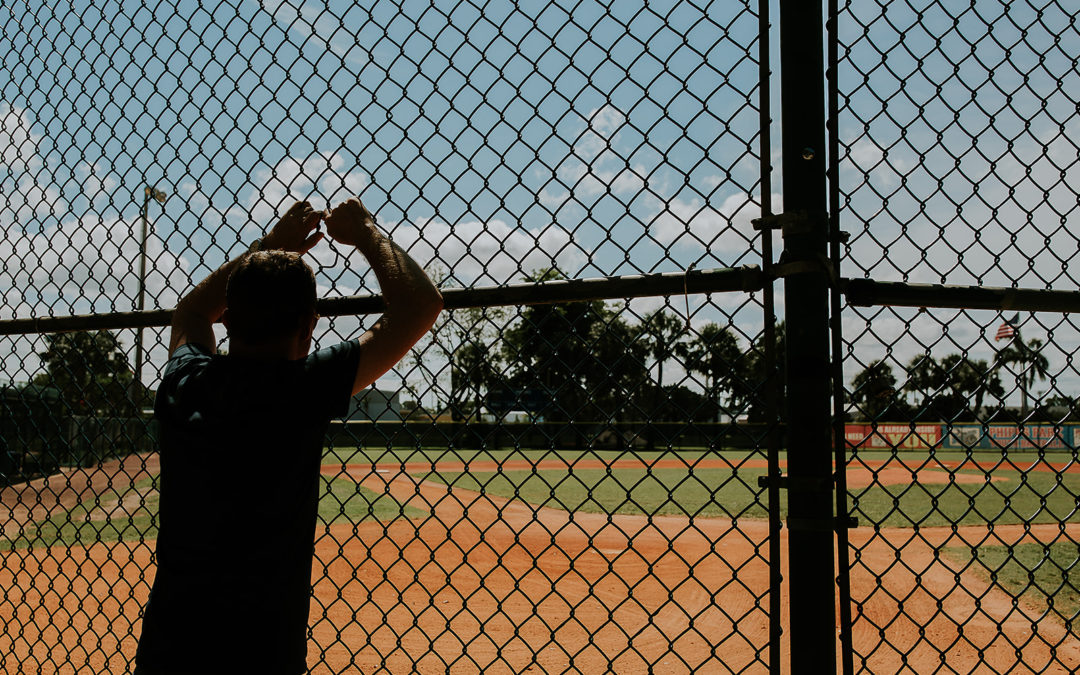 I began playing baseball in the tiny back yard of the home where I grew up. It was a small, bumpy patch of grass surrounded by four-foot hedges. I played with my older sister and neighborhood kids, including some my mom was paid to care for, at a time when the Big Red Machine was alive and well. Pete Rose was my hero. Charlie Hustle.

I’ve loved the game deeply for as long as I can remember, Now, I’m beginning to understand why.

Those are some of the reasons I always knew I loved it. But, now I know there is something much deeper and more significant.

I was born to parents of seven other children, six years after my youngest sibling. There was never a hint of an overt message that I was a mistake, or even the least bit unwanted. But, in a home like that, how could a parent possibly have much time for yet another kid? I felt that. A lot of the attention I received as a child was from my other siblings, who also just wanted to be kids.

Then, we were Catholic. But, we weren’t just any Catholics. My parents made a home in our neighborhood so my mom could walk one short block to St. Patrick’s to attend mass, early every morning, before we awoke. My dad was a Fourth-Degree Knight of Columbus and had the ring and the sword to prove it. All of the kids in my family attended parochial school at one time or another, except for me.

When I was three or four, my parents stopped going to church, and so did we, who were still under their care. My older siblings were married with kids by that time and they still attended mass every weekend. In our family, the topic was essentially off limits. My parents had their reasons and they said it was nobody’s business.

So, every Saturday evening and Sunday morning, from our front window I would watch my friends, my neighbors, my community, my cousins, and some of my siblings walk by our house on the way to mass. I was a Catholic who wasn’t a Catholic. And, like every kid, I just wanted to be like everyone else. I wanted to feel like I belonged.

Then, at eight years old, I began playing organized baseball. I was this tiny little kid with red hair and freckles all over his face. Tanner Boyle, of the Bad News Bears, comes to mind, too little for anything to fit him well. Everything was too big. I probably looked like I couldn’t throw to the backstop from the batter’s box.

But, when those coaches watched me throw the ball, they couldn’t believe their eyes. I had one hell of an arm and I loved to use it. I not only threw far, I threw precisely. Although I could never relax enough on the pitcher’s mound, I could throw runners out at any base from anywhere. And, they knew it.

Coaches shouted in amazement and disbelief when I threw runners out at third from deep right field, on the fly. Many times it came in the sound of a high-pitched, whistling “wheeeeew!”

I loved it. It felt great. And, I was a kid who needed somewhere to feel great.

After one practice, midway through my second and final season playing with a pitching machine, my coach saw an opportunity. He wanted to show me off to someone before I tried out for the next level. There was another coach leaving the diamond next to ours and he flagged him down.

“Tommy, go out to center field.” I wasn’t sure what was going on yet. “Deeper . . . Deep! . . . Now Ed, just stand at third base.” My coach threw him a ball and a glove and told him to play catch with me. That was the day Ed Hayes first called me Rocket Arm. I played for him, the best coach, of the best team, for three of the best years of my life.

We practiced harder, longer, and more often than anyone else, because we were the Astros. After a season of platooning in the outfield; growing and improving, I earned a place in the infield. I became the shortstop for the team and the coach who everyone despised for one reason. We always won. It was where I belonged. I was part of something great, that was bigger than me. And, I felt proud.

I played well into high school, but always for coaches who were nowhere near as good as Ed. At 12, everyone’s favorite teacher told me, in front of the entire math class, that my dream of playing Major League Baseball was impossible, even though he had never watched me play. It is still hard not to resent him for telling me that, because I trusted him. So, I believed him. That and playing for mediocre teams took the wind out of my sails.

My one true regret in life is that I didn’t play baseball for as long as I possibly could. I think about the few games when, if ahead in the late innings, I would ask to be taken out of the game because my arm was sore. If I could go back I wouldn’t miss a pitch. I wouldn’t have stopped playing until someone made me. Back then, I didn’t realize that, had I followed that path, I may not have ever played for money. But, I might have become a coach, or even a groundskeeper. And, I would have belonged there.

When I lost that part of my identity, bad things began to happen. Again, I had no place to belong – not good for a kid in high school. Eventually, it got dangerous. But, I survived that.